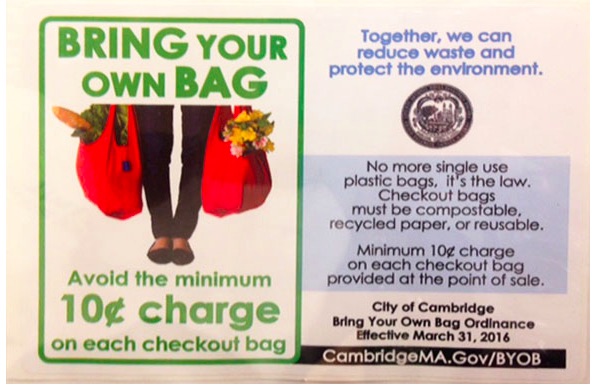 STATE HOUSE, BOSTON, NOV. 13, 2015….Hoping that bans on plastic bags and Styrofoam containers could one day be in place statewide, environmentalists on Thursday celebrated varied plastic bans in place in 27 cities and towns.

Plastic grocery bags, plastic water bottles and Styrofoam containers extract a toll on the environment, including sea life, according to Ellen Curren, of Women Working for Oceans. “It litters our parks. It clogs our drains. It ends up in the ocean and then it ends up in us,” Curren said. “I’m just going to repeat that: Plastic ends up in us.”

According to Clint Richmond, who helped lead a plastic bag ban in Brookline, the 16 municipalities banning single-use plastic bags cover 7 percent of the population.

Michelle Gottlieb, an elected member of Marblehead Board of Health, which helped push bans on plastic bags and polystyrene, acknowledged that “there’s no doubt that paper bags cost more than those single-use plastic bags, but our goal that we’re working towards is that people are taking fewer bags to help offset that cost.” Marblehead’s ban went into effect in May 2015.

Several representatives of cities and towns that had banned plastic bags, bottles and polystyrene containers received citations at an event at the State House’s Grand Staircase on Thursday afternoon. The municipalities banning bags are Barnstable, Brookline, Cambridge, Concord, Falmouth, Great Barrington, Harwich, Manchester-by-the-Sea, Marblehead, Nantucket, Newburyport, Newton, Northampton, Provincetown, Truro, Wellfleet, and Williamstown, some of which have banned polystyrene and single-serve water bottles as well. The cities and towns banning polystyrene, but not plastic bags, are Amherst, Pittsfield, Somerville, and South Hadley.

A bill seeking to ban plastic bags statewide had a hearing in June before the Committee on the Environment, Natural Resources and Agriculture.

Groups are working on bag laws in:

Copies of every bag bylaw or ordinance that has been proposed or passed in the Commonwealth thus far are available at http://www.massgreen.org/plastic-bag-legislation.html

Massachusetts Polystyrene bans
To date (Oct 29, 2015) laws regulating EPS foam and other forms of polystyrene have been passed in:

Groups are working on polystyrene ban in:

Copies of every polystyrene bylaw or ordinance that has been proposed or passed in the Commonwealth thus far are available at: http://www.massgreen.org/polystyrene-legislation.html

Google Group
The Mass Green Network connects passionate citizens who want to be part of the solution
To subscribe, send email to mass-green-network+subscribe@googlegroups.com